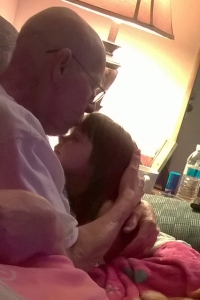 Mr. Beagle with his beautiful granddaughter. He reunited with her after telling his hospice chaplain that seeing her again was the most important thing to him.

We see it again and again, without fail. Often, bucket-list wishes are about people and relationships. We saw it again recently when a grandfather in our care expressed his deepest desire.

Sally, Mr. Beagle’s Hospice Care Plus chaplain, asked him what was most important to him during one of her visits. (We ask this of all our patients, regularly).  He said breathing was most important, because difficulty breathing is his biggest challenge. But his wife urged him to think more carefully about his answer.

“Now, now,” she said. “There’s something much more important to you than that.”

She clearly thinks the world of him, too.

He paused for a few seconds, until tears filled his eyes. Then, he told our chaplain that there is someone special he really needs to see.

His three-year-old granddaughter lives 4 hours away. He and his wife raised her until she was 14 months old. He hadn’t seen her since. He adores her and, in that moment that he told Sally about her, it was clear that being with her is definitely what’s most important to him right now.

Thankfully, his team–Sally, his nurse Paige, and his social worker, Jackie–are committed to honoring these bucket-list wishes for patients and families. They went to work–contacting family members, asking questions–and discovered that the granddaughter and her parents very much wanted to visit, but money was tight and they weren’t sure how to pay for the fuel to get there and back.

So, we dug into our special fund for bucket-list wishes and found enough to provide a $50 gift card to fund the trip.

It was worth every penny, and then some. Just look at these pictures. Not only is it clear that he is at peace now that he’s with her again, but also that this child adores her grandfather. What an incredible moment to have captured, so that, in the years to come, she will have something to remember the special trip she took to see the grandfather who couldnt’ rest until he saw her again.

Help us celebrate National Hospice and Palliative Care Day by donating or volunteering with Hospice Care Plus at #WeHonorLife.